I remember being the odd kid for listening to Balance Her In Between Your Eyes on my way to school while also being the cool kid for playing Mi Mujer at house parties. This is what struck me about Jaar, he’s not your typical single-genre musician; he can make you dance, he can be a rock star and he can also create beautiful ambient sets like the one at Oude Kerk.

After nearly a decade of devotedly listening to his music, I can say that I know his work really well but I can’t say I know all of it and that just fascinates me. This man creates so much stuff under different aliases, formats, and releases, it’s impossible for me to say that I know it all. It has been such a wonderful journey listening to his music, new and old and I really enjoyed being able to see the connections within his music throughout the years. He certainly changed a lot from his radio-famous days by just running away from the mainstream and with that, he gained so much depth and it’s not like his debut album, Space is Only Noise lacked any. It is still one of the best albums of this decade and I still can’t believe he released it when he was just 21.

Some of my favorite tracks took years to officially come out and it’s been such an incredible ride to listen to them hundreds of times in mixes and then finding them as hidden easter eggs on the back of his Nymphs vinyl releases (I’m talking about Revolver, Took Me Out and I Know What U Did). I honestly think this is what makes his music even more beautiful, I actually forbid myself to rip these songs on my phone because I think their physicality makes them so much better and I’m sure he feels the same way about it. He always insisted on releasing things in physical formats such as The Prism, a small player that has two headphone jacks or Ines, a compilation on a silver USB necklace.

Then there’s also the other-people.network, an online, semi-fictitious network of interlocking radio stations built around chance operations. It’s a huge project with over 30 hours of content of many different forms, I haven’t been able to go through all of it yet but I certainly found some amazing stations. You can find stations with Jaar’s albums and also stations with unreleased music of his, of other artists from his label or just awesome music mixes in general. There’s even a book about the network with the artwork of 111 of the 333 stations it contains and loose transcriptions of each radio program.

I genuinely think of Jaar’s music as an interconnected universe or a family of so many different audible entities and Oude Kerk felt like the home of all that. In an interview regarding his Oude Kerk residency, he mentioned various factors and symbolisms that lead him towards this place, he even slept inside the church so he could fully experience the space. You could definitely feel the intimate relationship he developed with this space during his sets.

Everything he played was created from the space itself and with that, he also took advantage of the crazy acoustics of the cathedral. All the speakers were pointed towards the ceiling and everyone just kept looking upwards like the sounds were actually happening somewhere between the ceiling and the floor of the church. It’s one of the most extraordinary things I ever experienced, it felt like there was an entity that was messing around with the organ and other physical things, it seemed very very real.

This was not a concert, I can’t really label it. All I know is that it felt incredibly playful and meditative, you were given a chair at the entrance and you could sit anywhere you wanted or just wander around the place. It was super intimate, especially his first set at 6 AM. I’m so happy I attended all three, three-hour sets he presented, at first I feared that it might get boring but it certainly wasn’t the same experience thrice. Each set showed me something different and the last set was particularly impressive since it started at 10 PM and the church was pitch black, only illuminated by candles.

I’m incredibly grateful to Oude Kerk, amazing things happen when an artist is given the liberty and support to create something so beautiful. Fifteen-year-old me would have never imagined himself standing in a church listening to Jaar’s music for nine hours inside a cathedral. It’s just such a surreal combination of things that now that I look back on them, they make complete sense.

Down below there’s the full gallery, click on the images to view them in full screen. 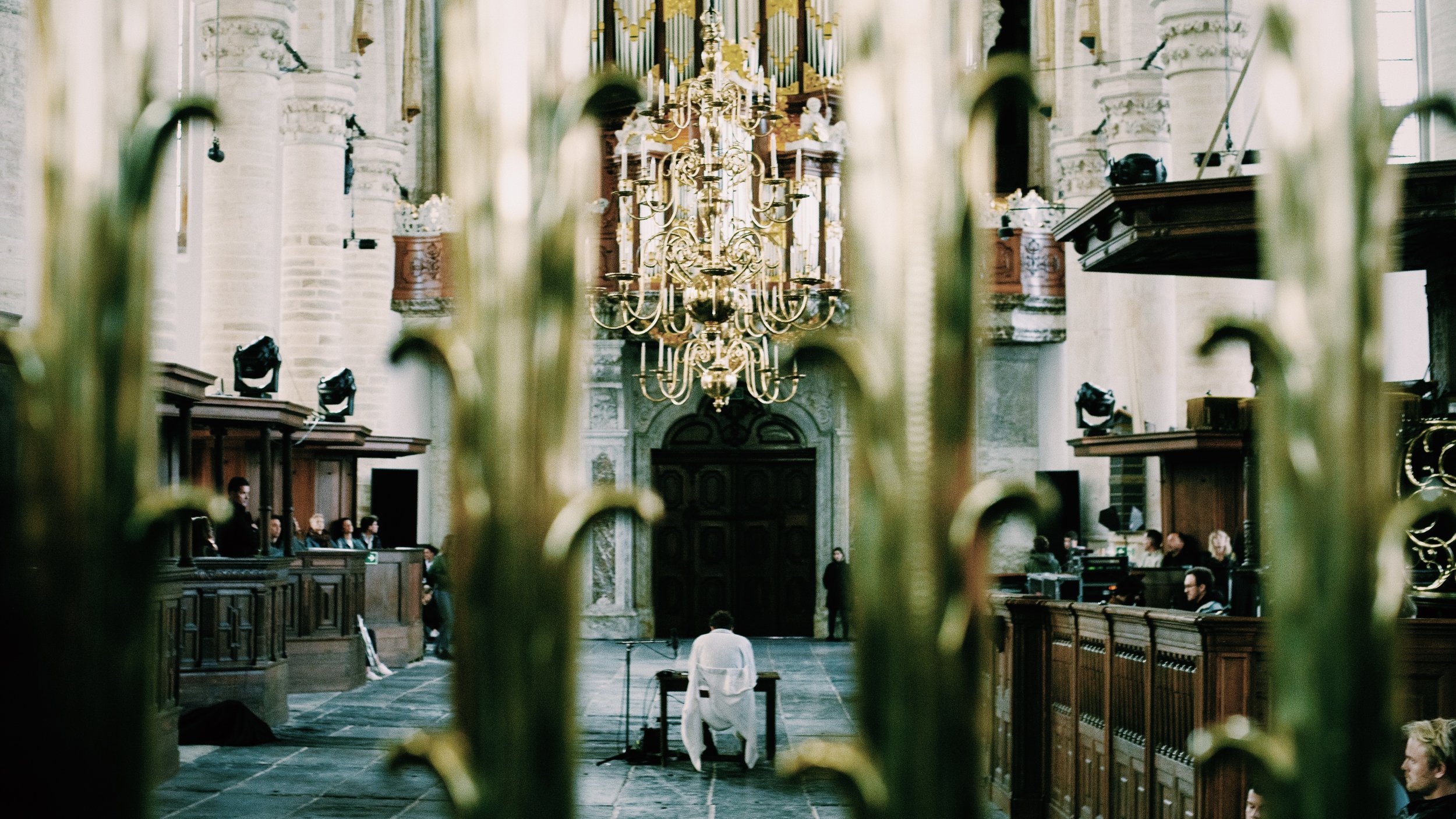 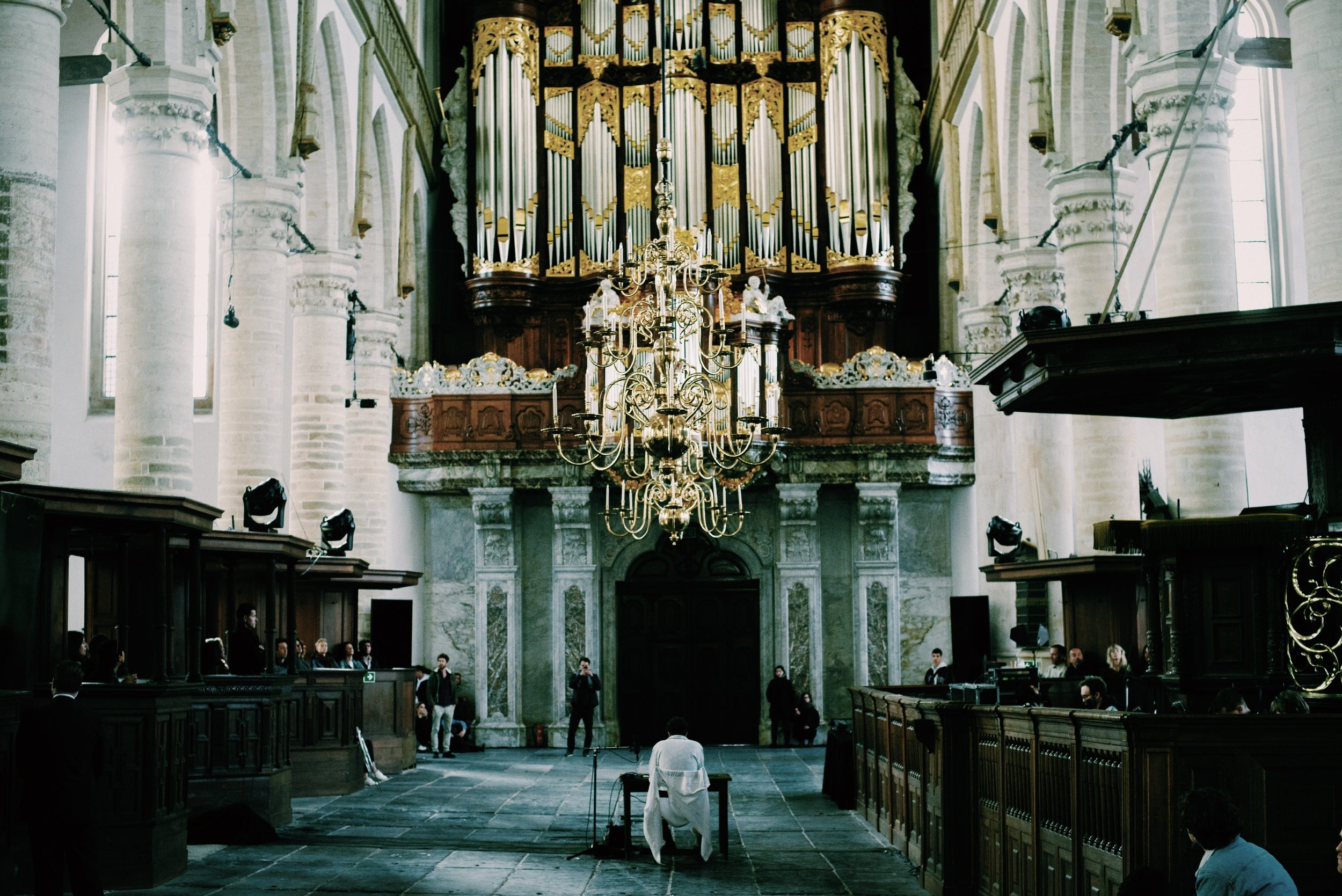 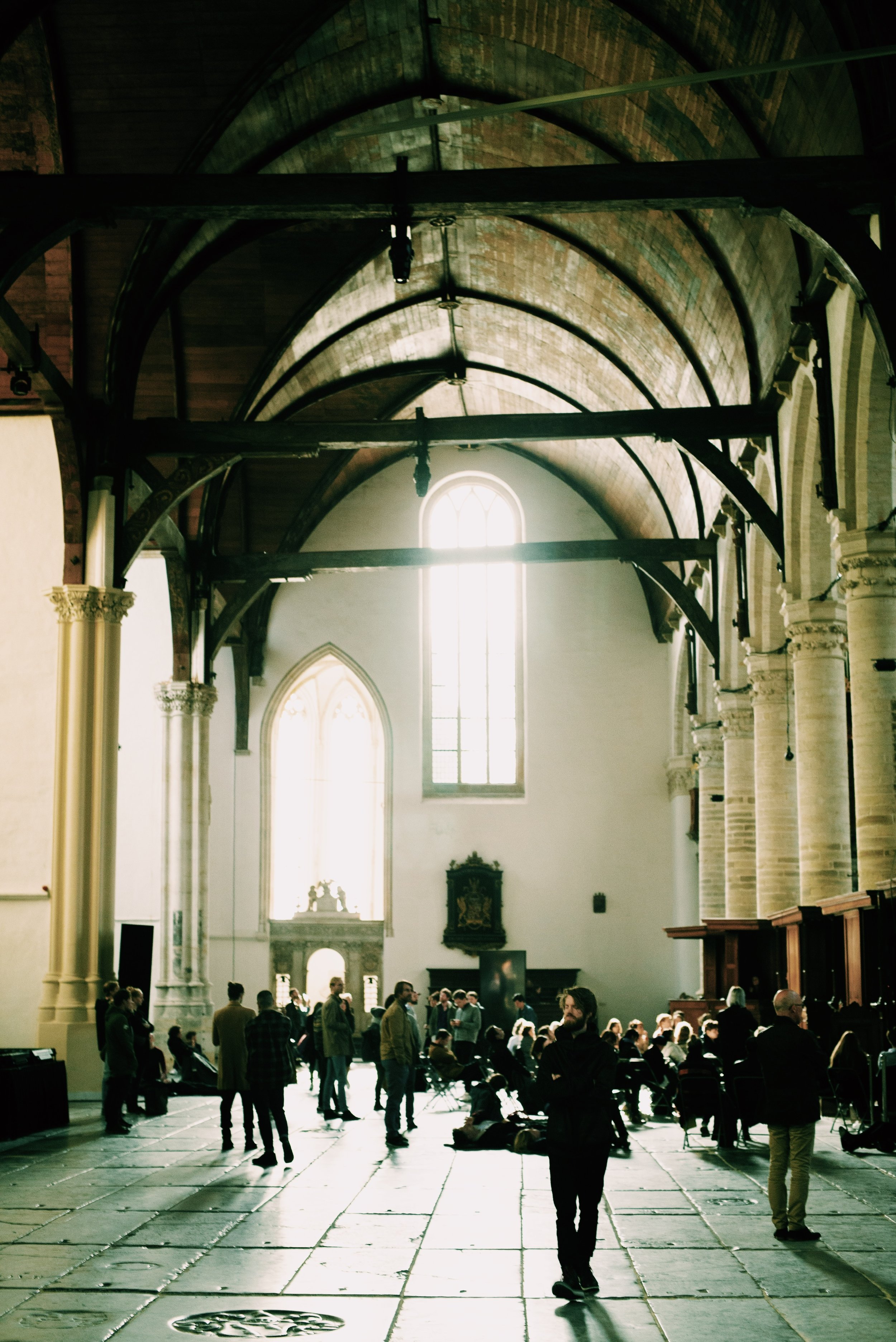 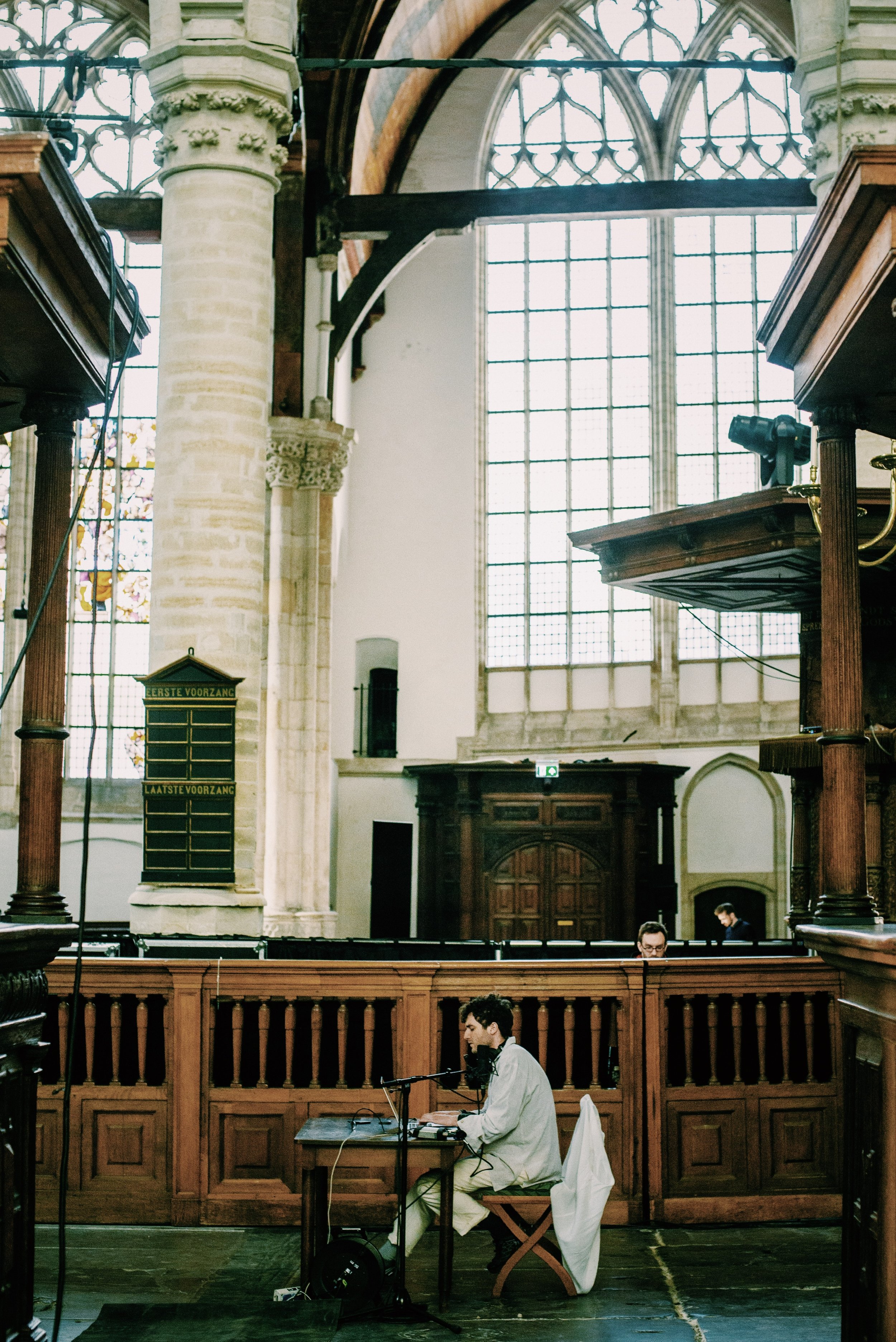 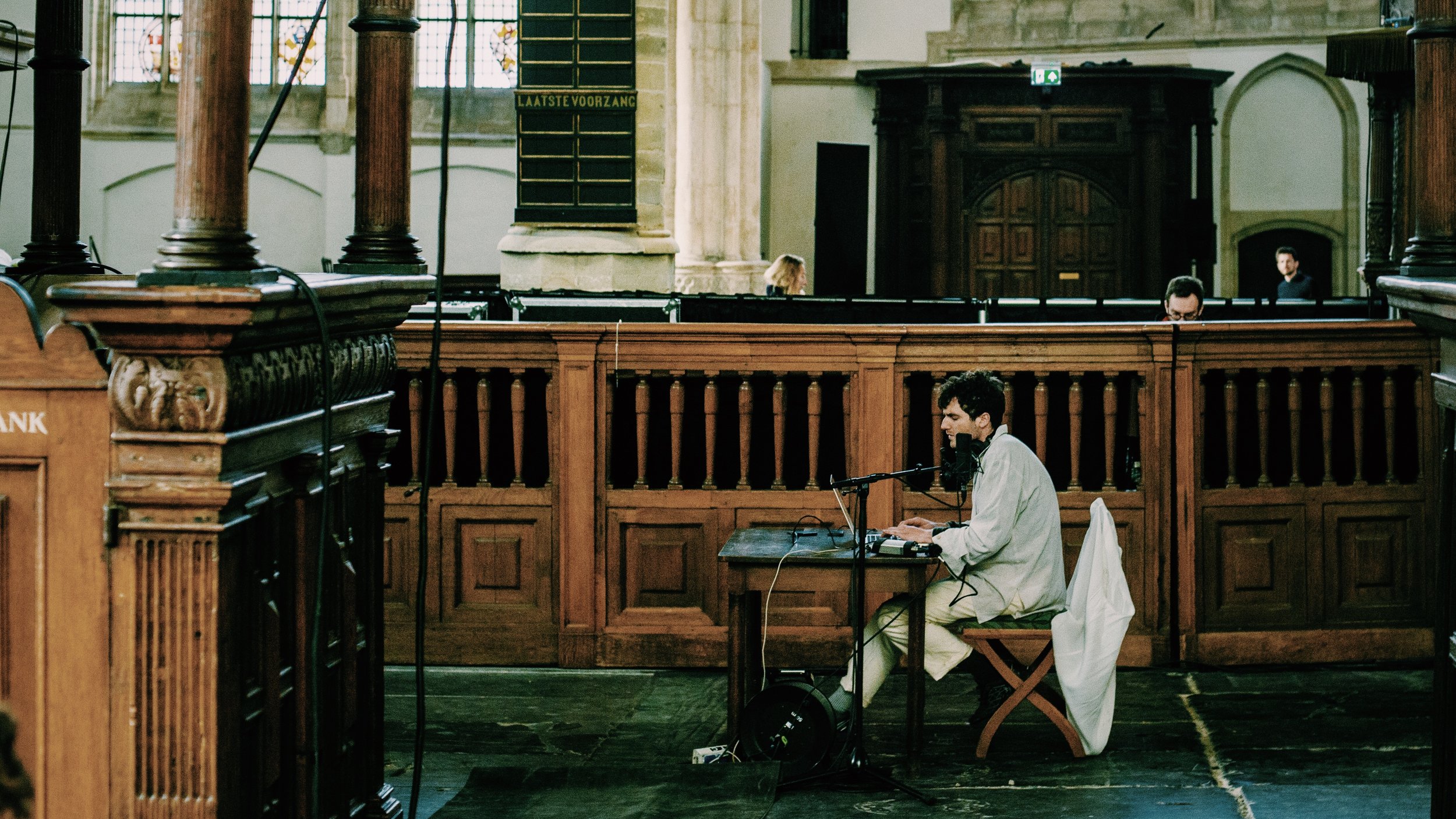 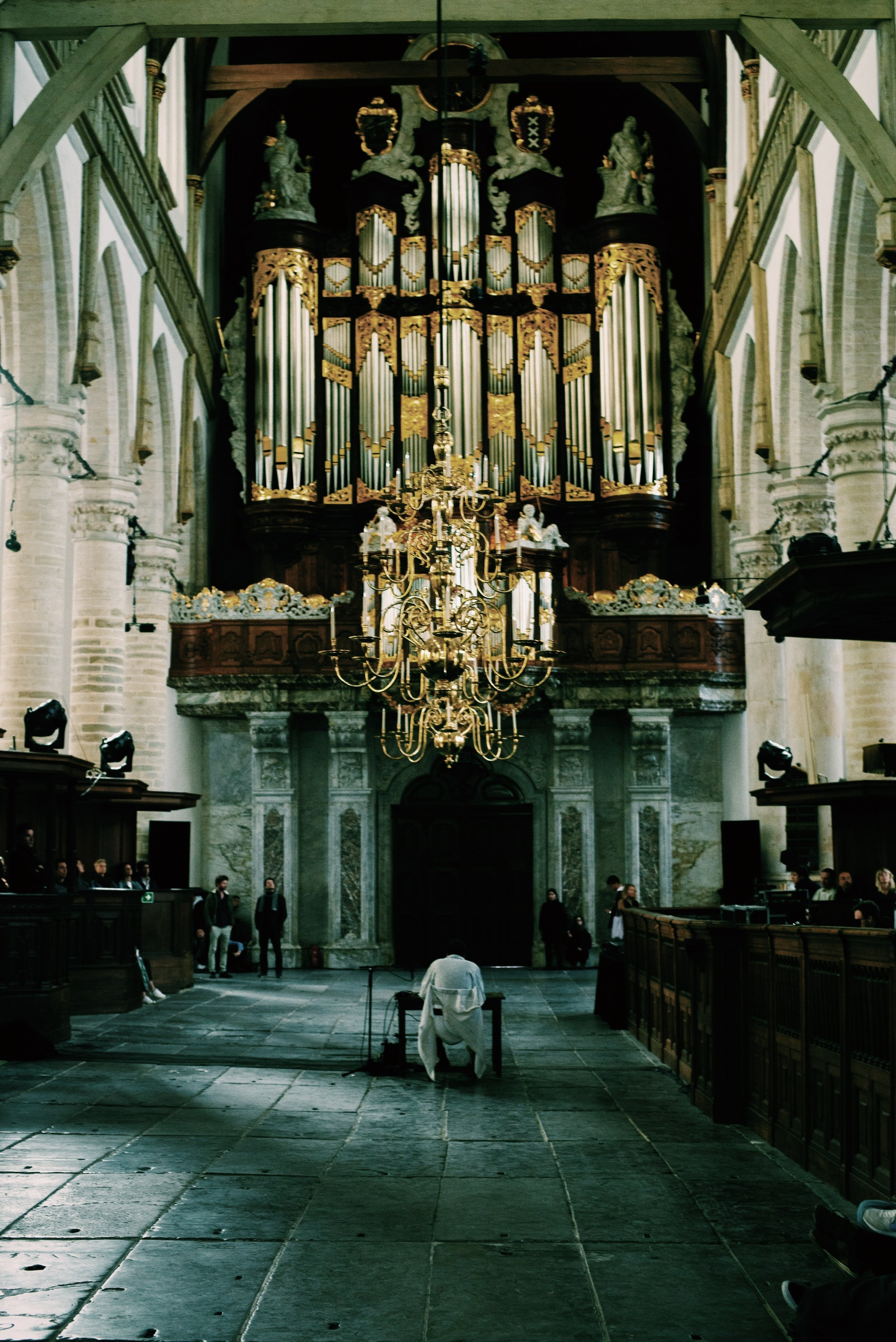 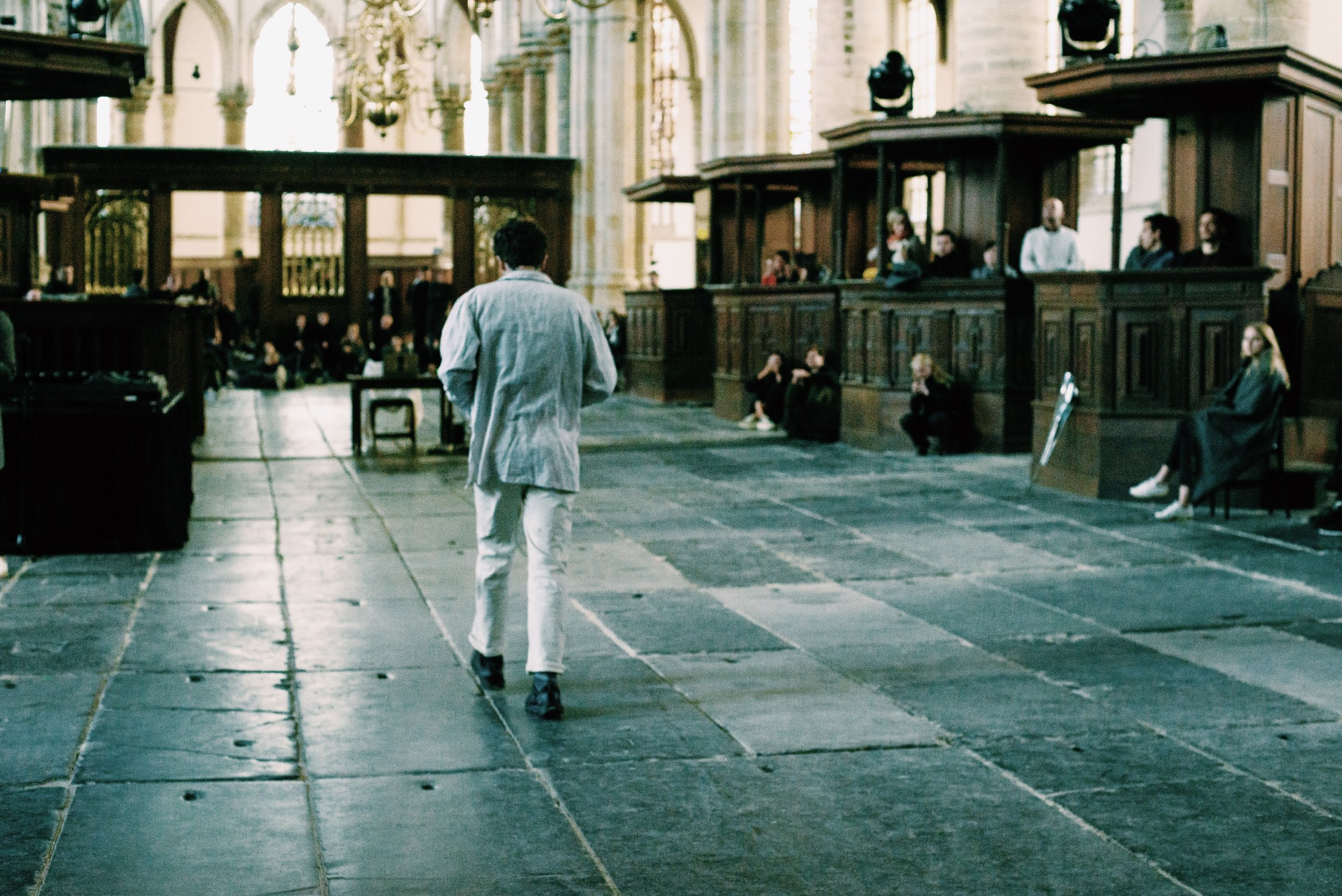 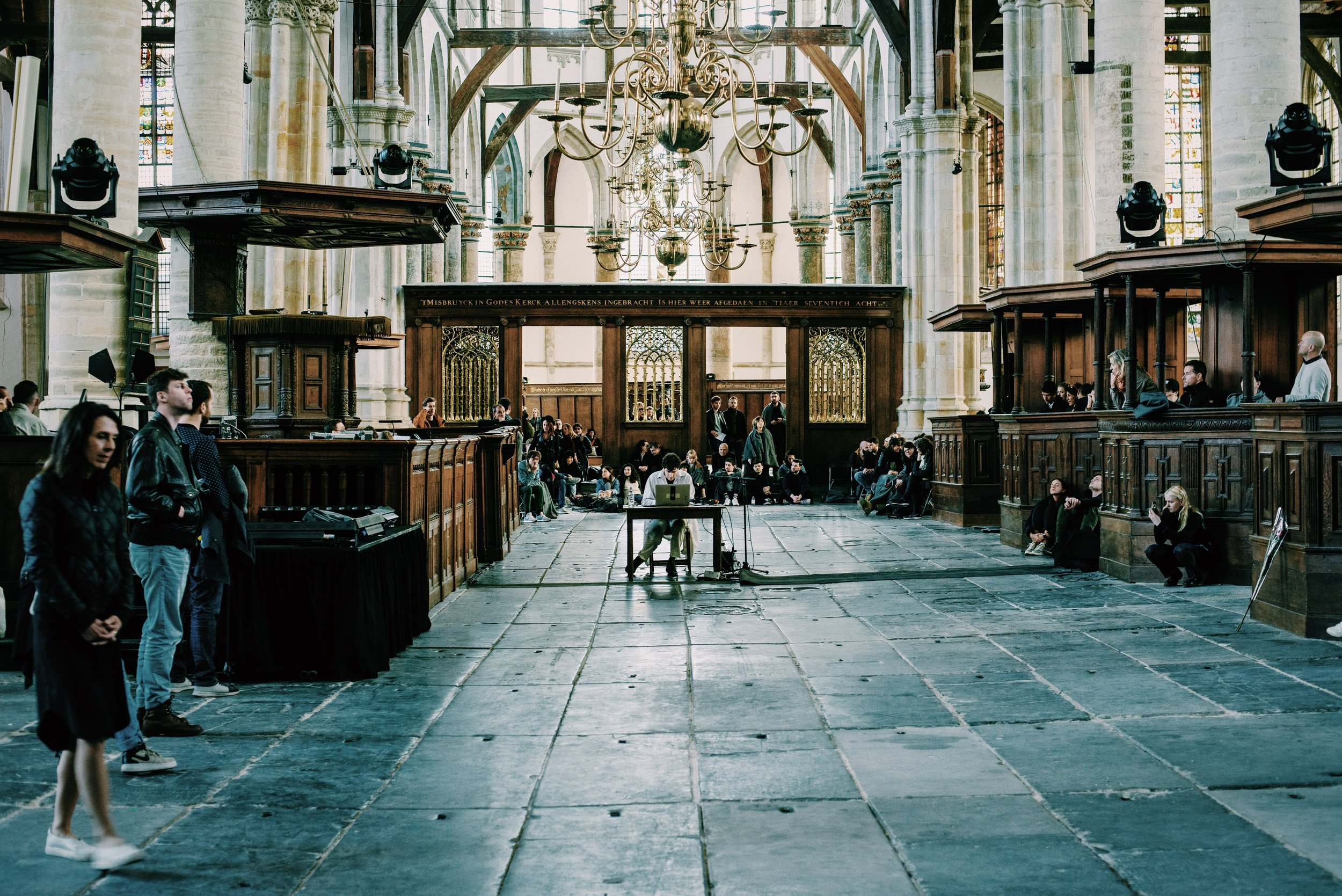 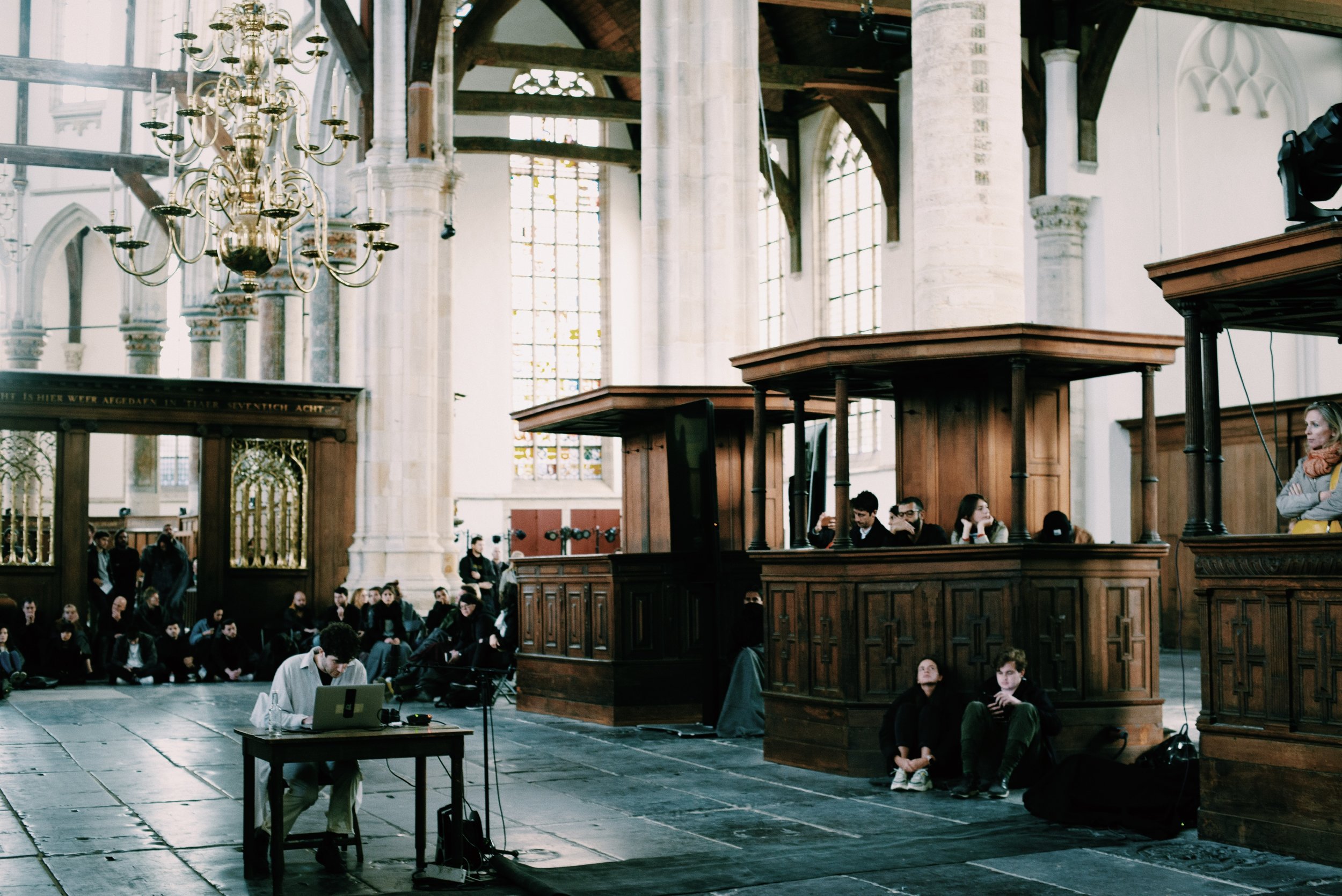 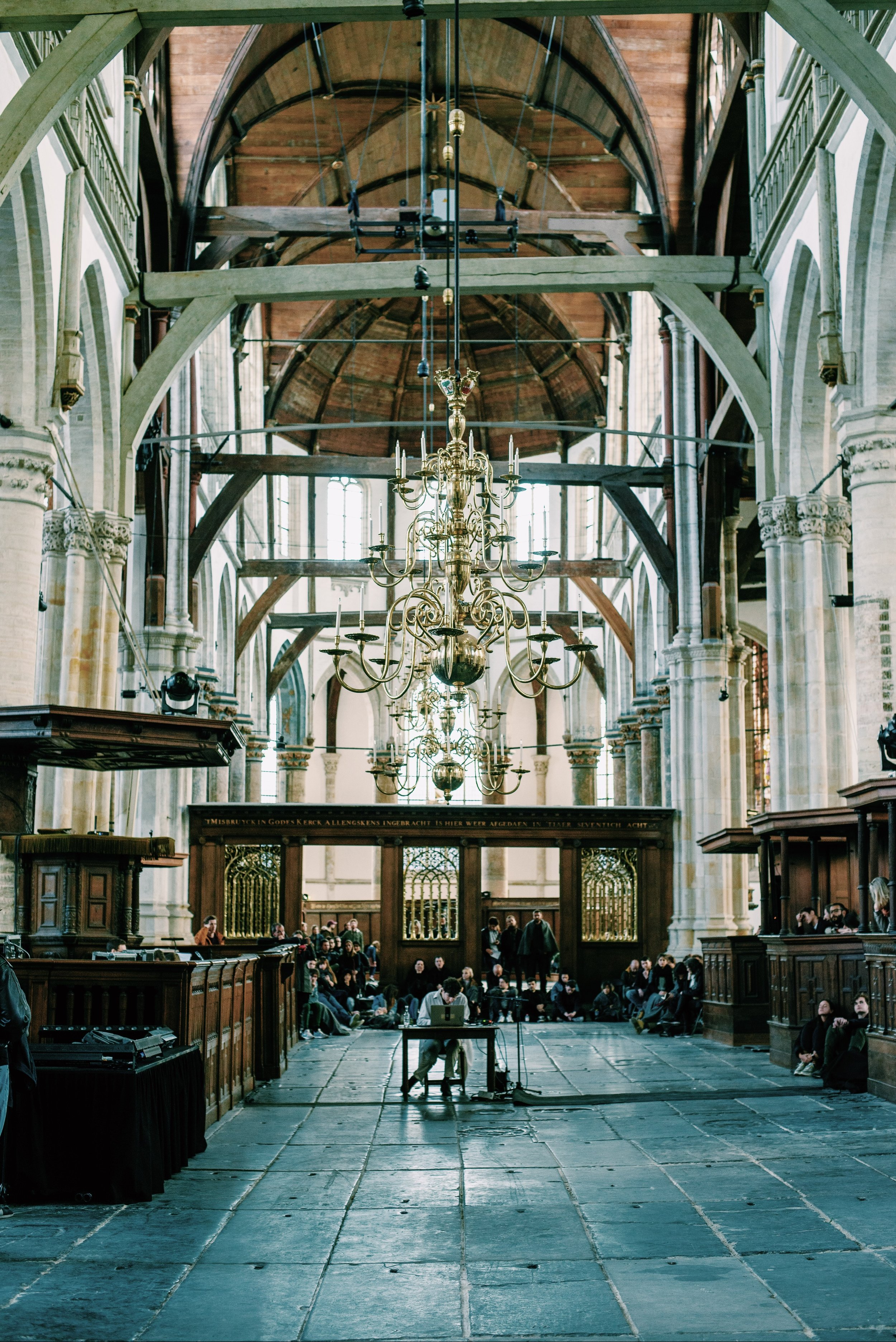 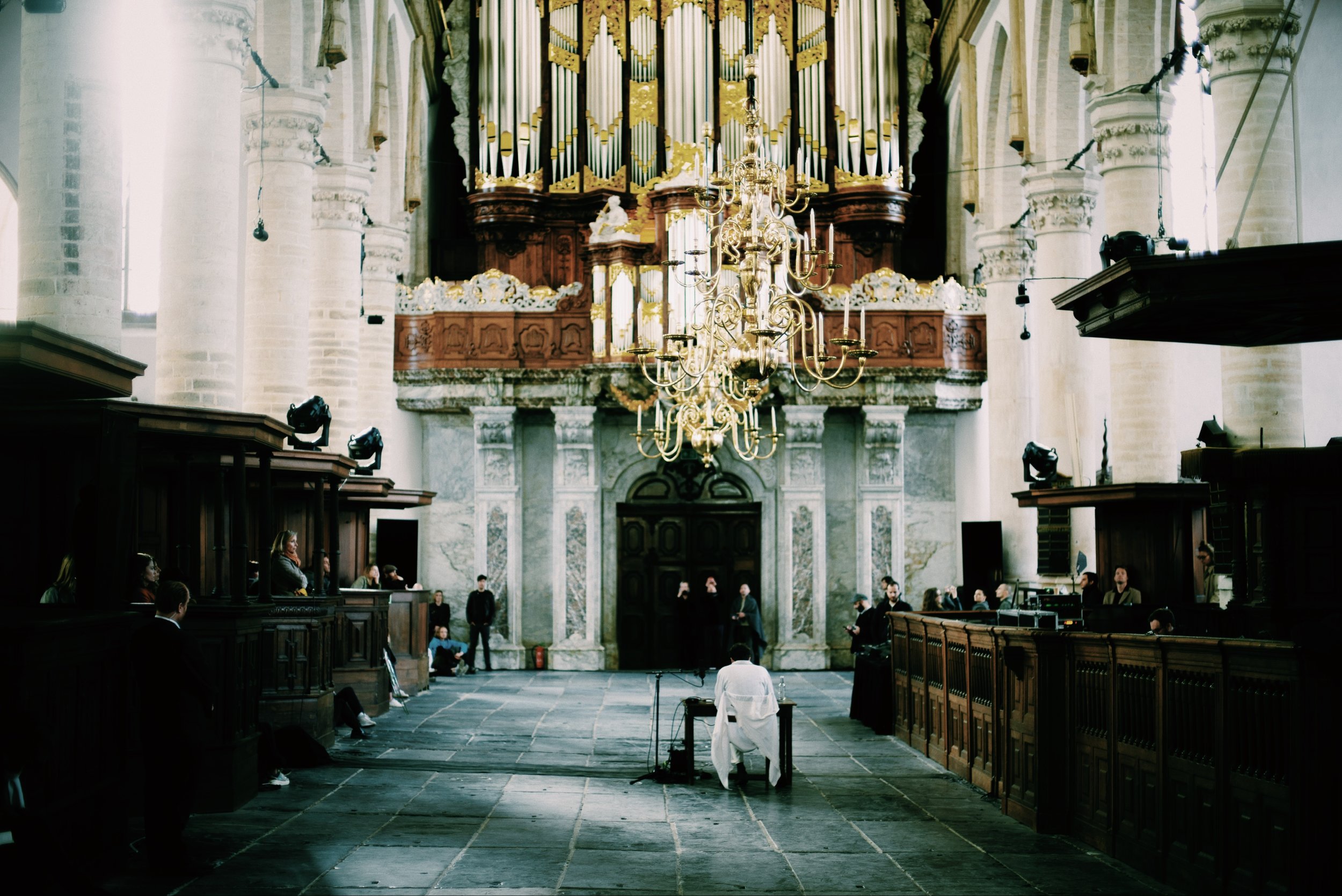 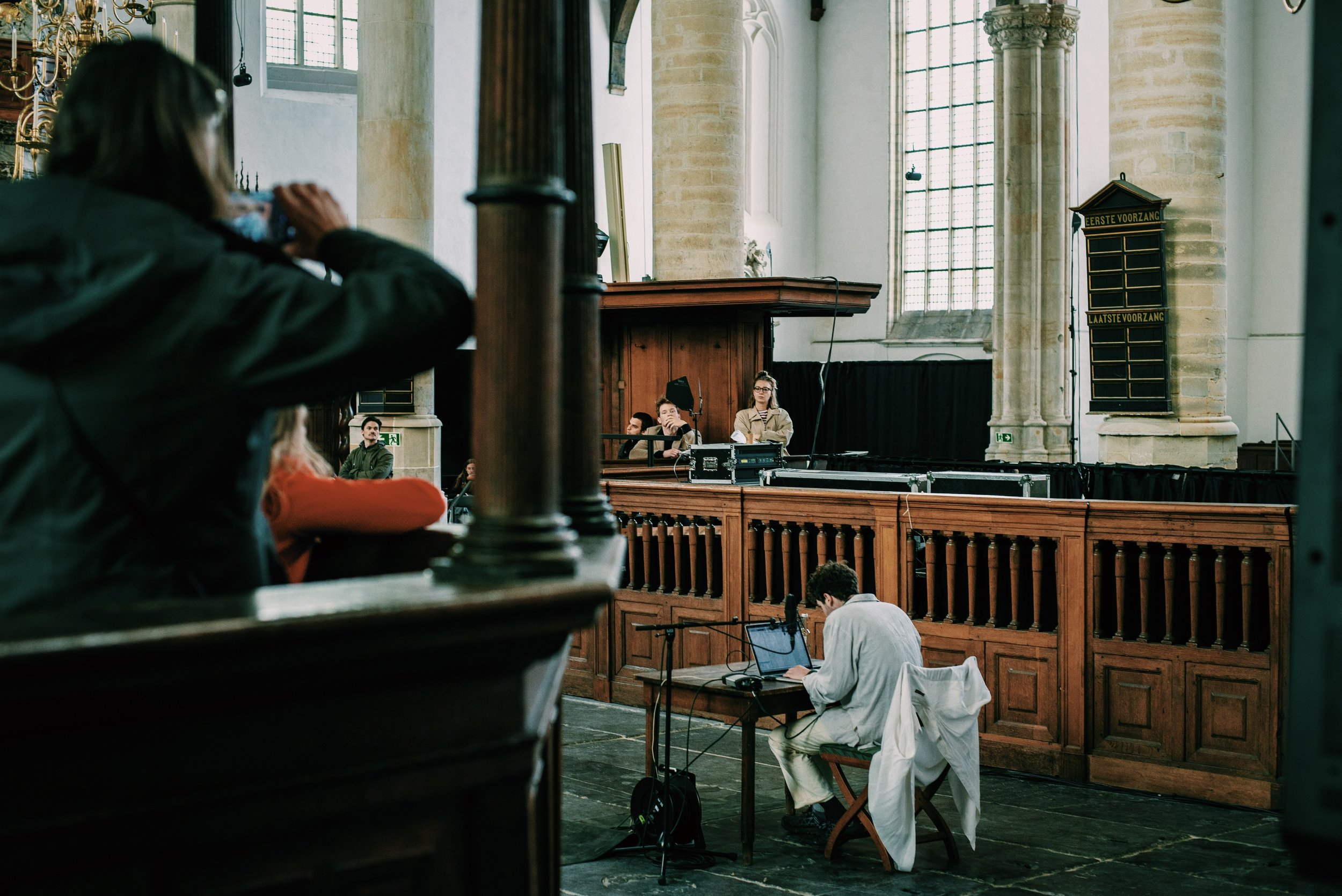 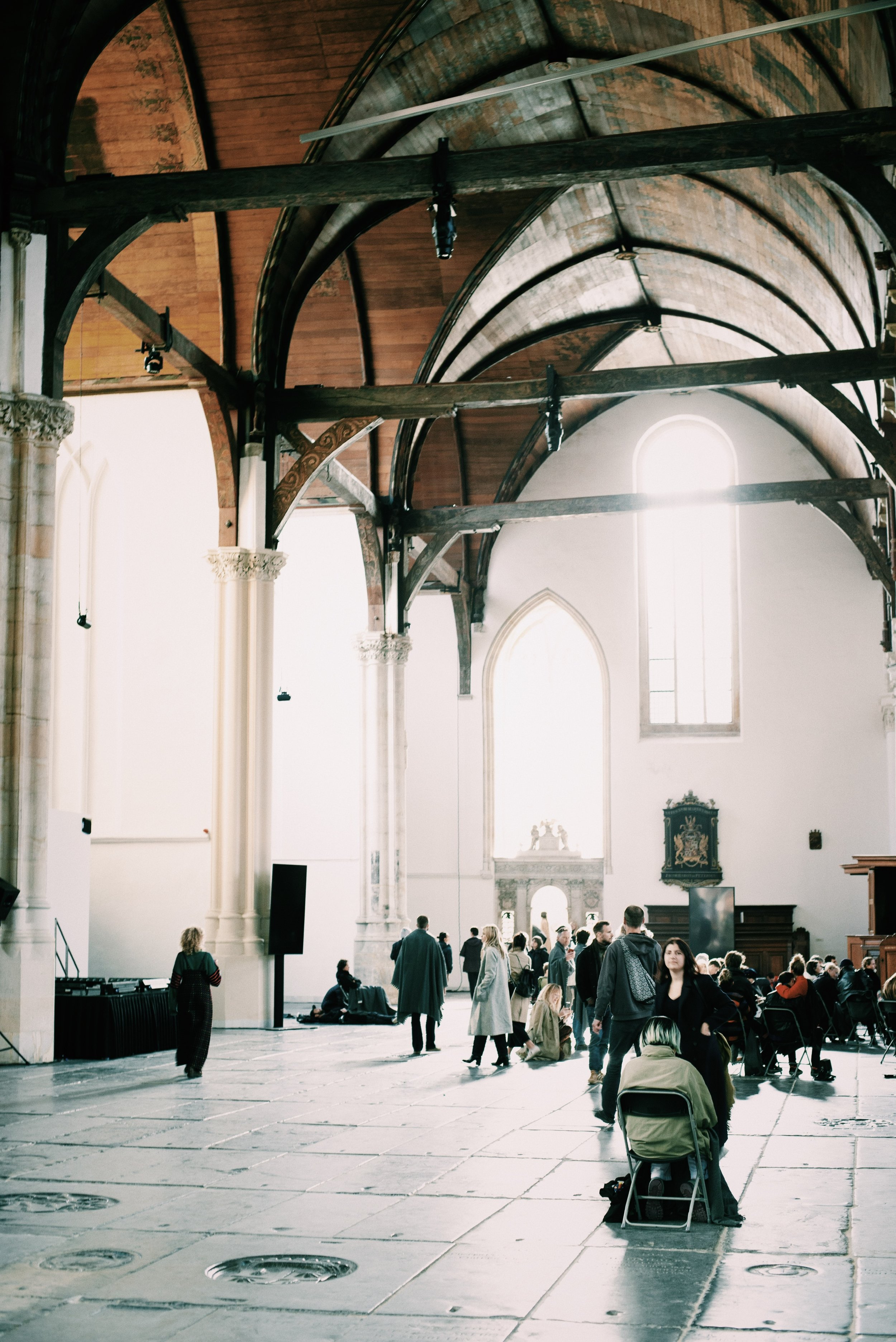 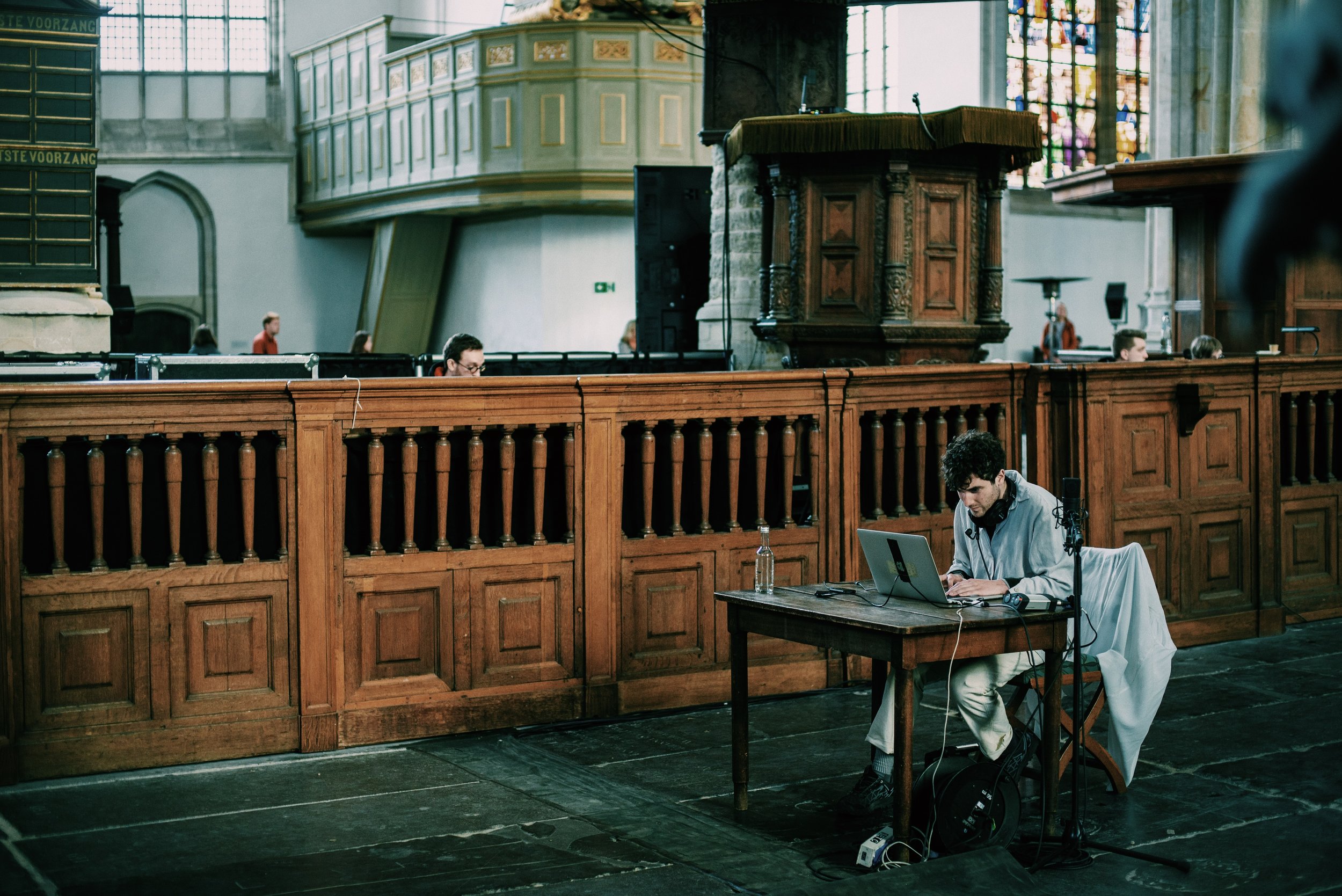 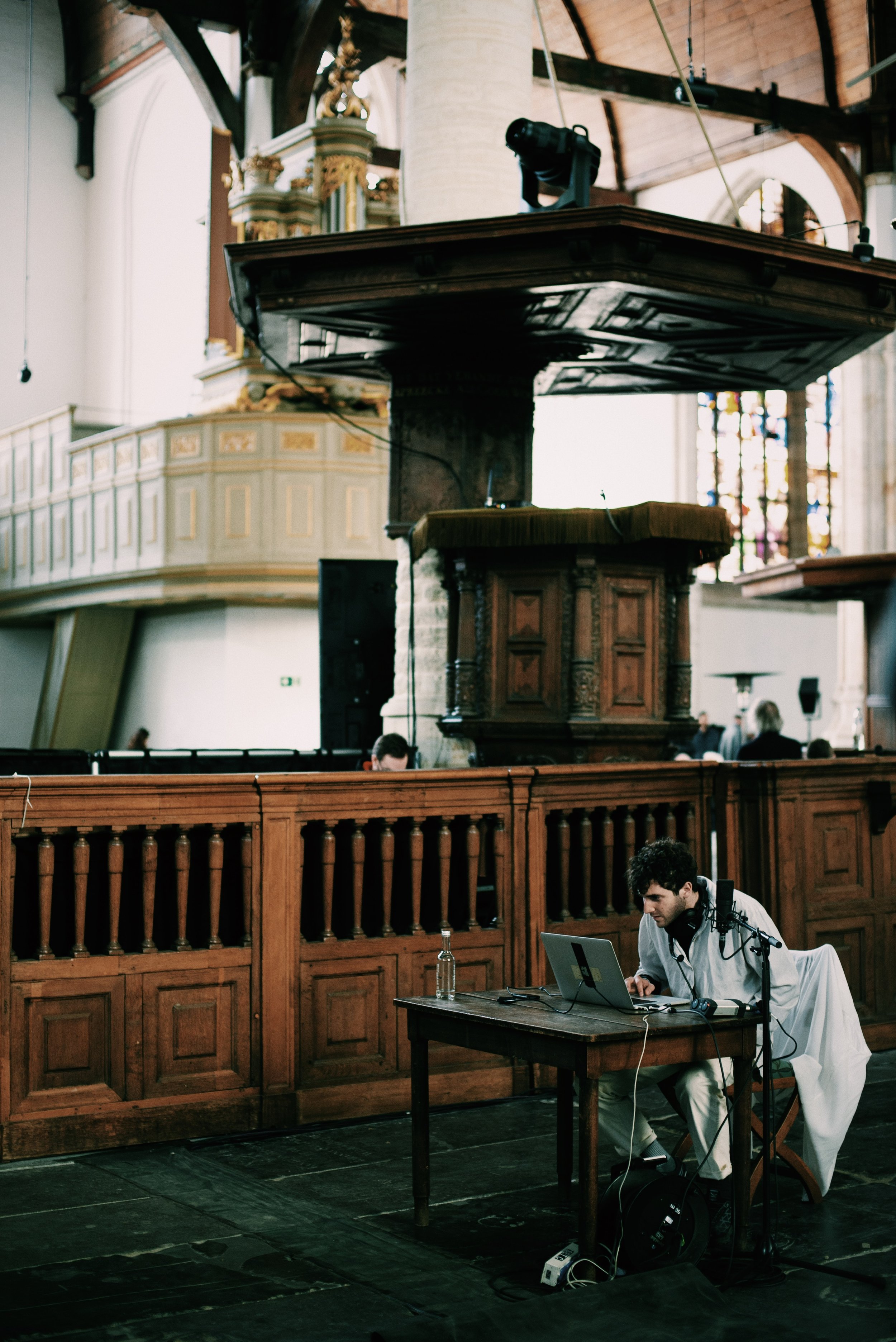 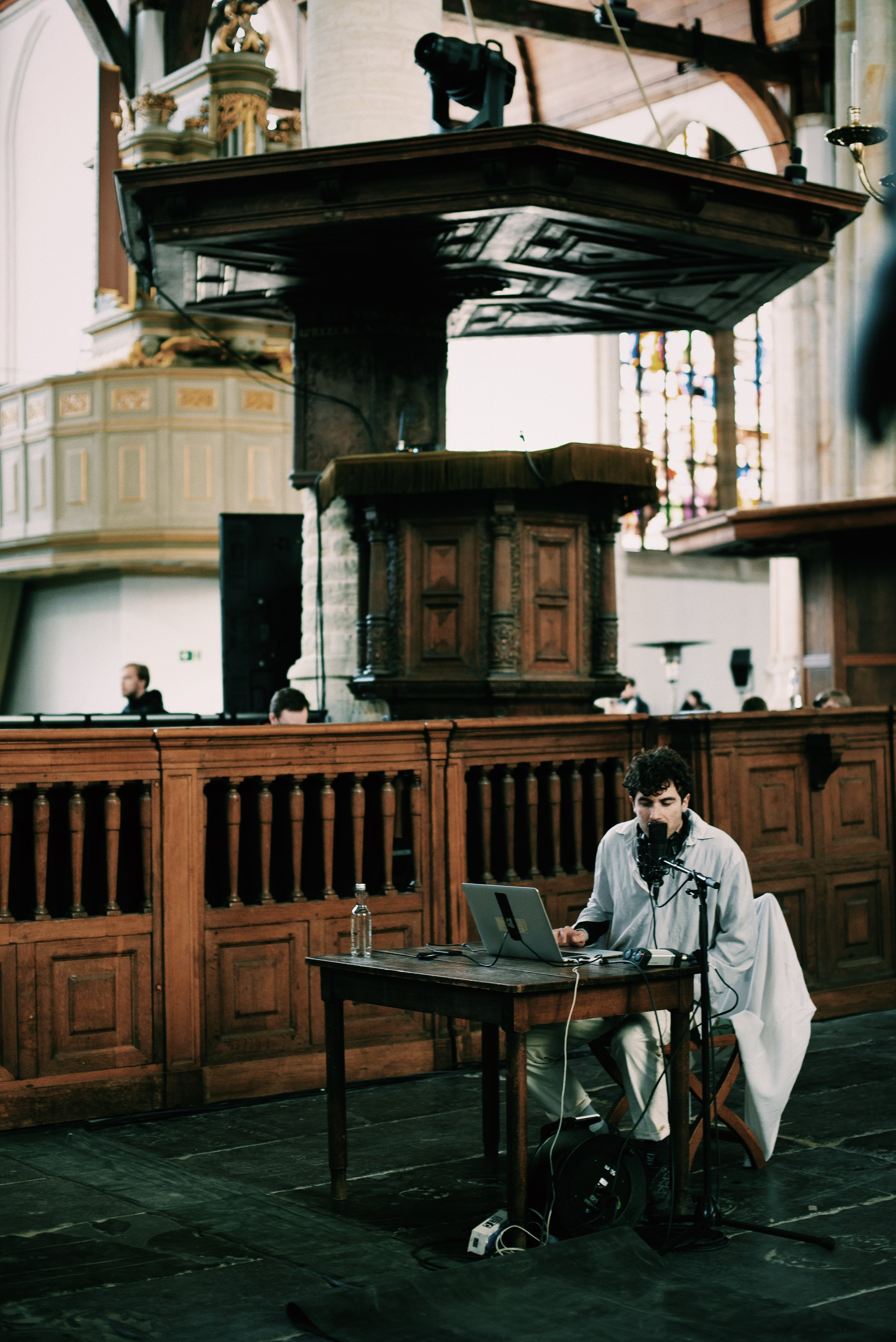 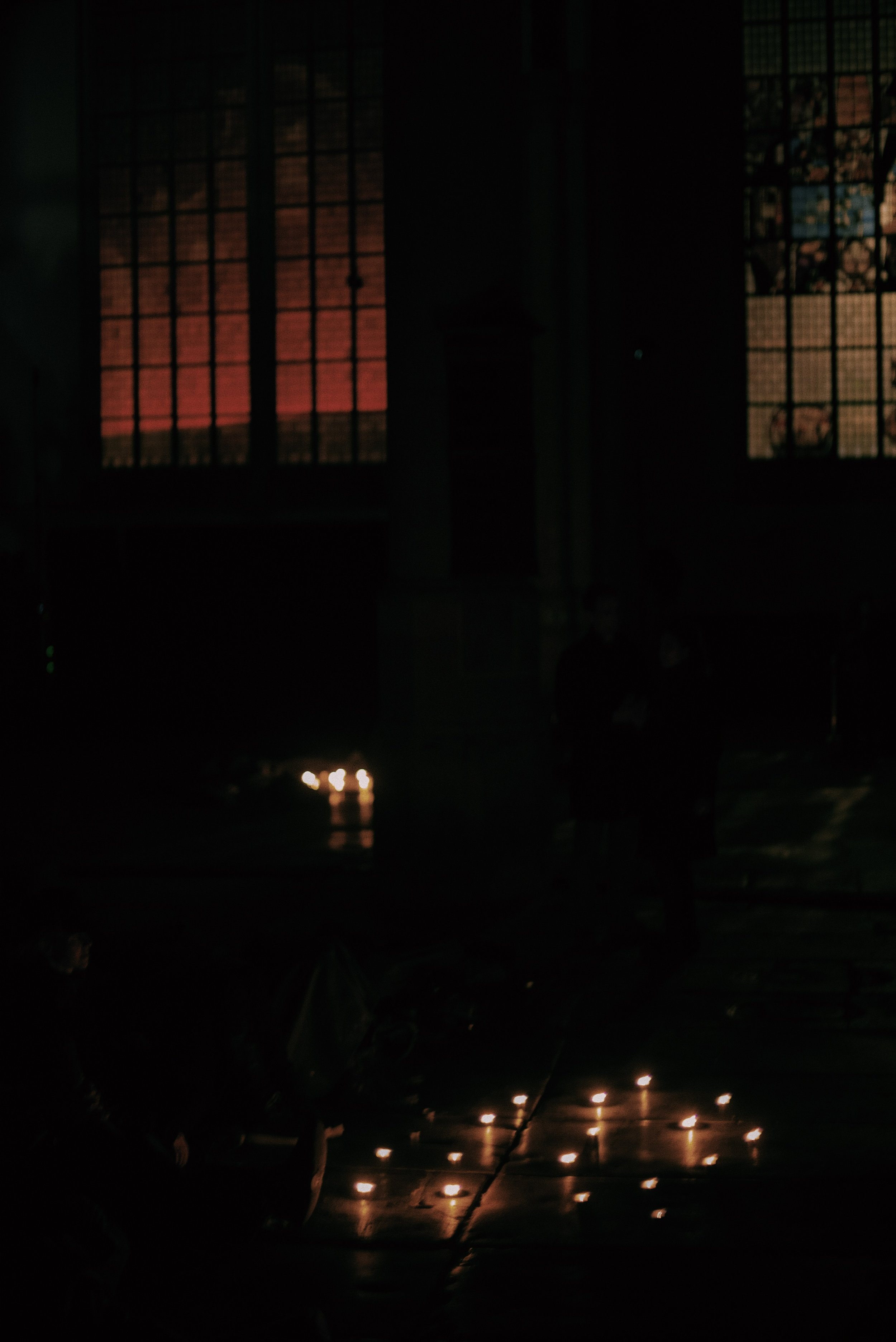 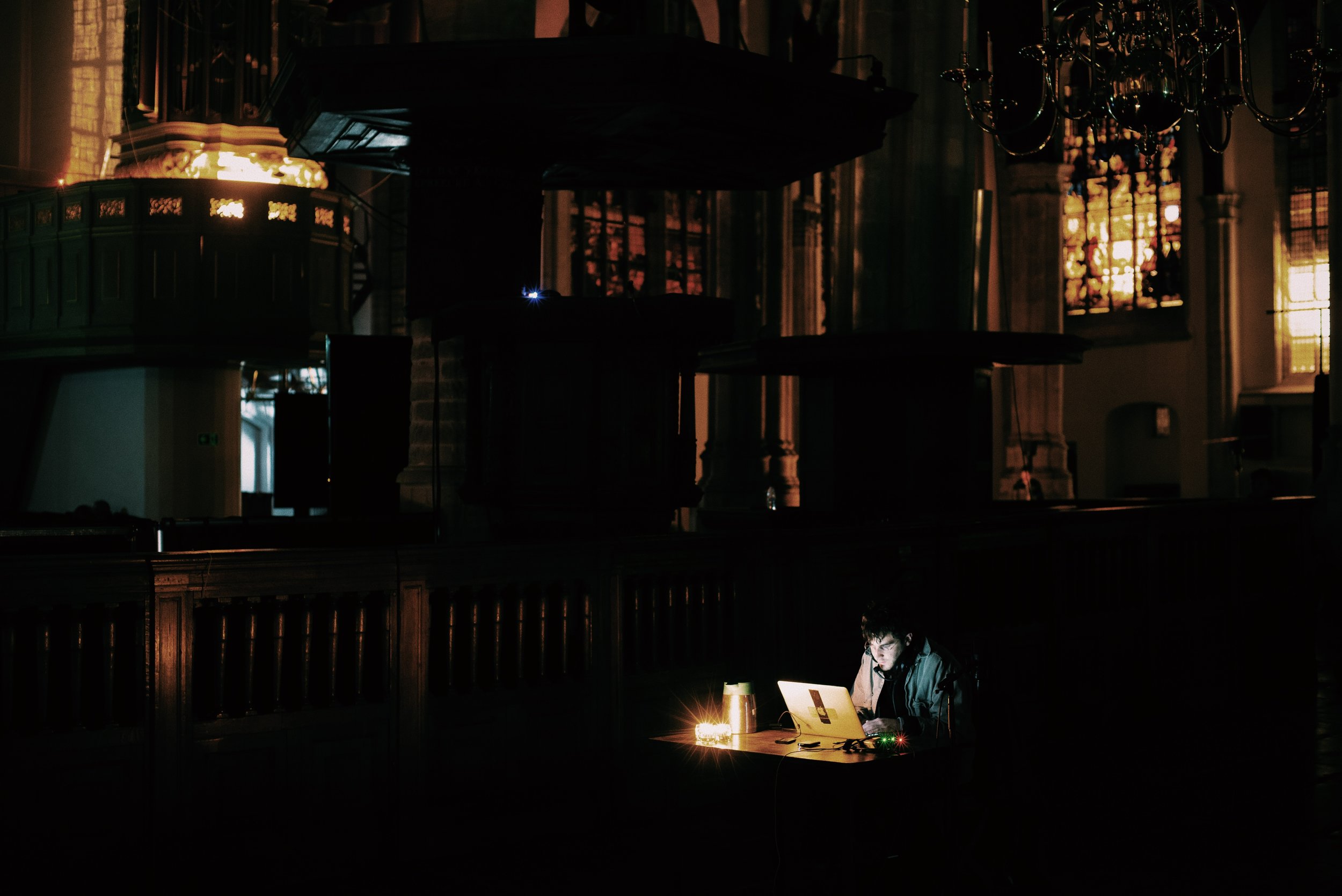 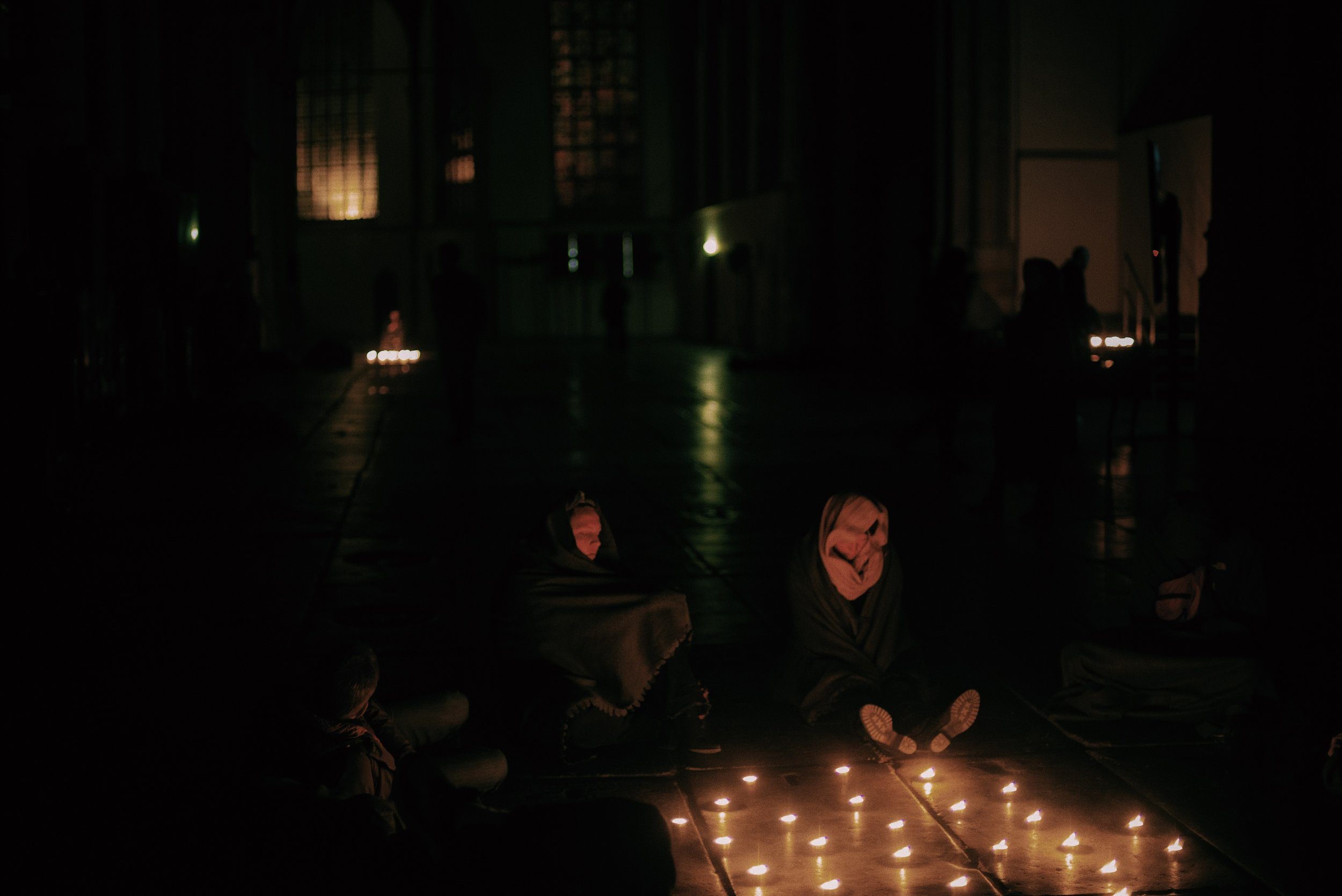 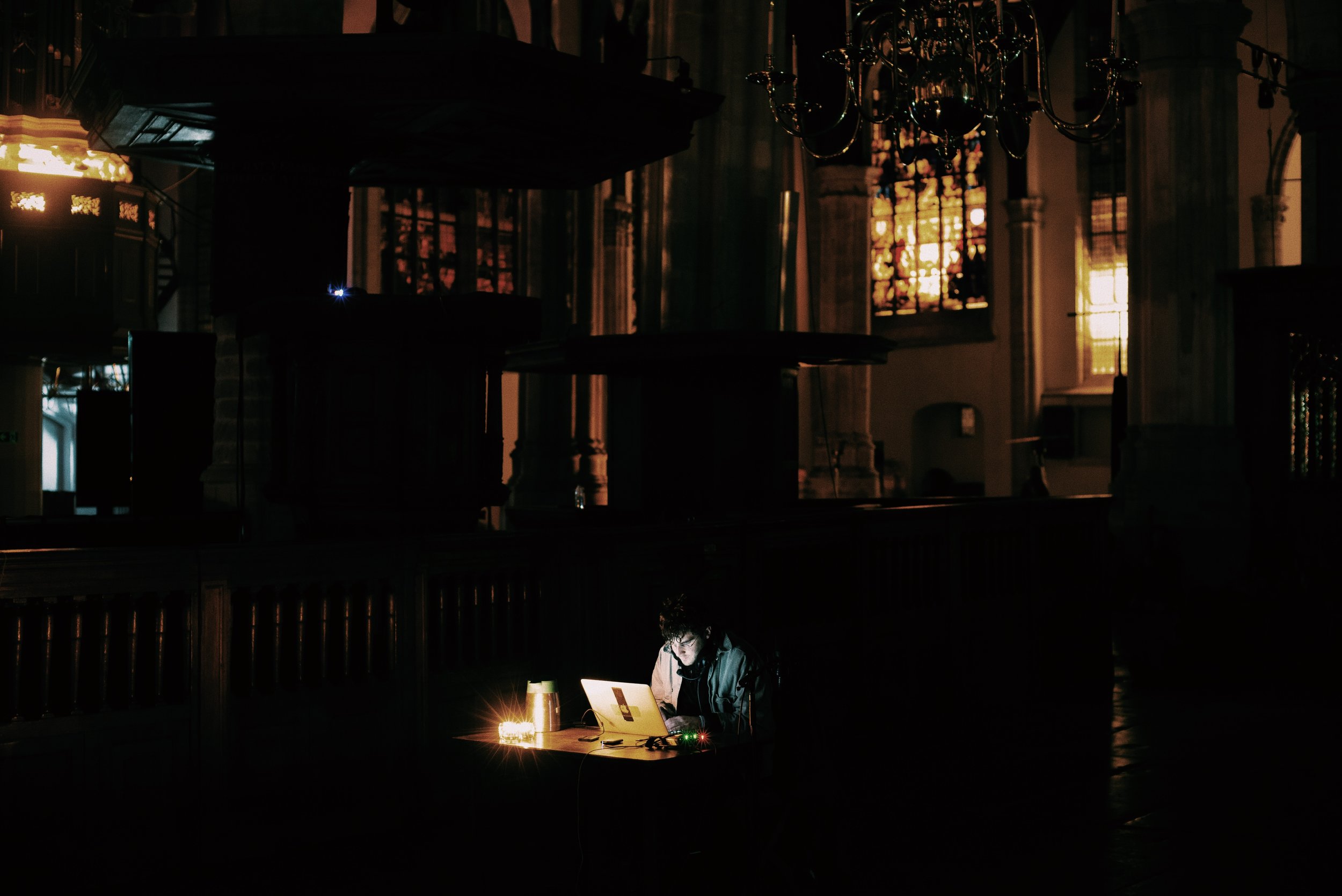 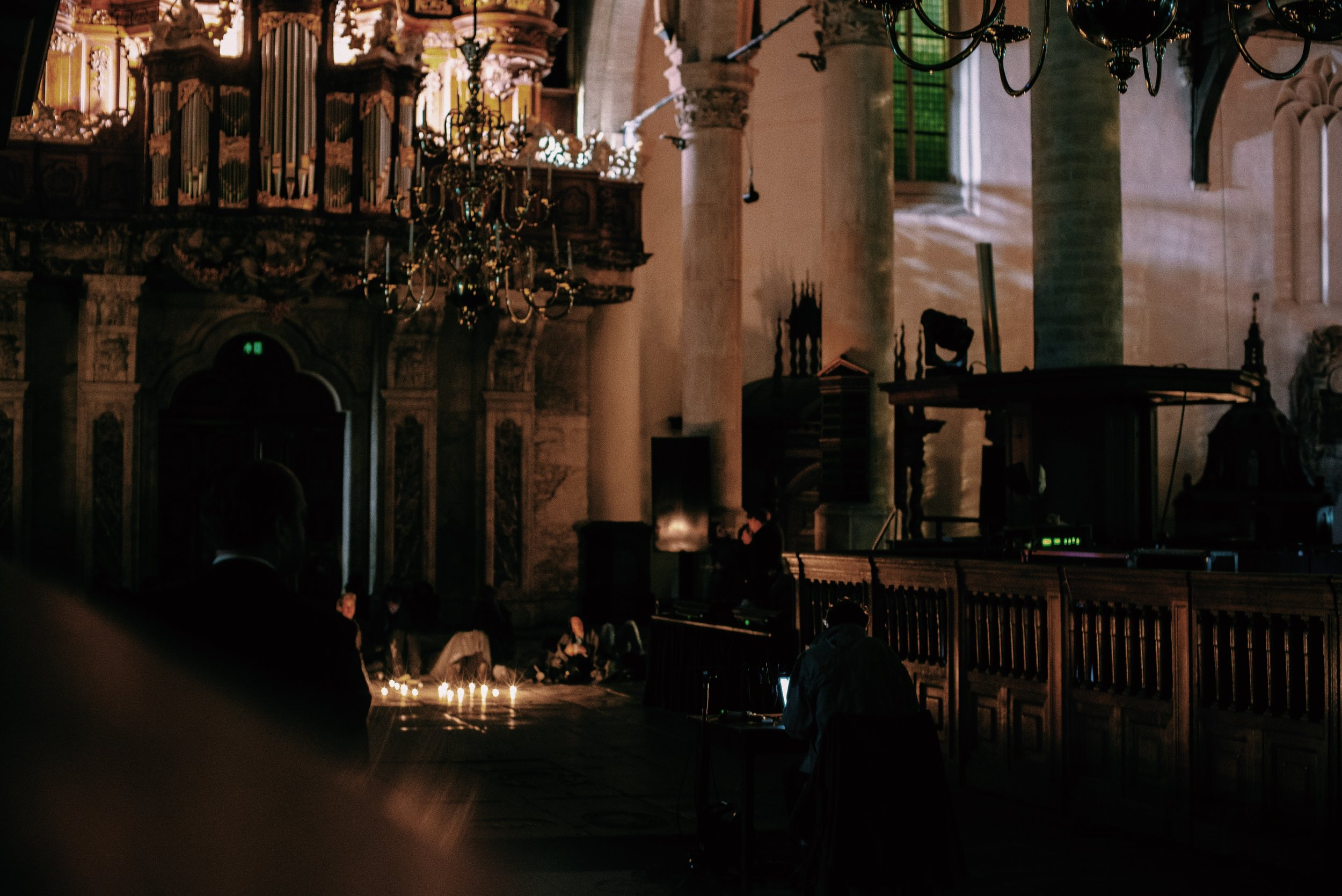